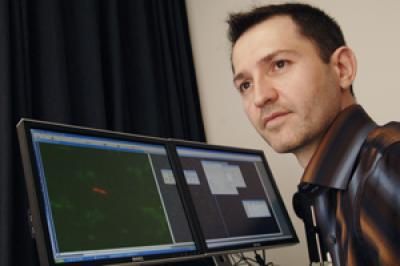 In a new study available online and featured on the cover of today's issue of Cell, UT Southwestern Medical Center researchers describe how bacteria play the market so well. Inside each bacterial cell are so-called genetic circuits that provide specific survival skills. Within the bacteria population, these genetic circuits generate so much diversity that the population as a whole is more tolerant of - and is more likely to survive - a wide range of variability in the environment.

"We have found that a particular genetic circuit is responsible for generating diversity within the bacteria population," said senior author Dr. Gürol Süel, assistant professor of pharmacology and in the Cecil H. and Ida Green Comprehensive Center for Molecular, Computational and Systems Biology  at UT Southwestern.

This diversity, like a diversified investment portfolio, means that each bacterium has characteristics that allow it to survive under certain conditions, said Dr. Süel. "When conditions are highly variable, some individual bacteria are equipped to thrive in the highs or lows, while others tank," he said. "It's like the stock market. If you invest all your money in just one stock, and conditions change to lessen or completely eliminate its value, you won't survive financially. Similarly, in the case of these bacteria, if all the cells were adapted to only a small, rigid set of environmental factors, the population would be wiped out if conditions unexpectedly changed.

"There seems to be an optimization going on in these organisms," he added.

By generating diversity, genetic circuits ensure enough cells will survive to carry over the population, especially in times of variable conditions, Dr. Süel explained. Essentially, variability of bacterial cells appears to match the variability in the environment, thereby increasing the chances of bacterial survival, he said.

Genetic circuits are distinct sets of genes and proteins within cells that interact in a specific pattern, resulting in some biological process. In this study, the researchers focused on a genetic circuit within a bacterium that controls the transformation of bacteria cells in and out of a state called competence. Differences in the duration of the competence state have particular survival advantages, depending on the environmental conditions.

Biological "noise" in the genetic circuit, which comes from random fluctuations in the chemical reactions involved in the pattern of interactions, is similar to the undesirable noise - like static heard on AM radio - found in electrical circuits. In biological systems, however, biochemical "noise" is beneficial. In fact, it is the root mechanism that drives diversity within the bacteria population. Dr. Süel previously found that when noise reaches a certain level in some genetic circuits, it can prompt cells to transform from one cellular state to another.

For the current study, the researchers went beyond studying the native genetic circuit. Just as electronic maps can find alternate routes between two points, the UT Southwestern researchers also developed an alternative, synthetic genetic circuit that used a different architecture - or route - to accomplish the same function as the native circuit.

Dr. Süel believes his group is the first to insert such a synthetic genetic circuit into living bacterium and show that it can replace the biological function of the native version. He said his team was surprised to find that the behavior of the synthetic circuit was most precise, essentially generating less noise. The result was a population less diverse than the natural one. They were even more surprised to find that the lack of precision - or greater noisiness - in the native circuit ultimately allows bacteria to survive in a wider range of environments.

"It turns out that sometimes being sloppy can be good," Dr. Süel said. "For these bacteria, the more variable they are, the better they will be able to perform because they can adapt to a wider range of environments."

Dr. Süel said this approach of engineering alternative genetic circuits can in principle be applied even to human cells and possibly help explain why diseased cells have different survival capabilities than healthy ones.