Time For Change? Pollution has had an unexpected effect on natural evolution

Evolution is a genetic process that shapes the behavior and appearance of species in a beneficial way as a result of long-term exposure to environmental stresses. Normally, the evolutionary process is very slow; the transformation of simple single-celled organisms into today’s complex species, including the human race, took thousands of years. Ironically, humans themselves have introduced an environmental pressure powerful enough to speed up the evolutionary clock: pollution. A recent study by Dr. Zhangpeng Yuan and his team at the New York University School of Medicine found that a population of tomcod fish in the Hudson River had been exposed to such chronically high levels of industrial pollution that they gained a heritable resistance to the damaging effects from the contaminants. Many other examples of drastic evolutionary genotypic and phenotypic changes have been observed over a relatively short period: decades, or even within generations – each in response to pollution. Are these “micro-evolutions” leading to beneficial adaptations, or are they a signal of severe harm to our ecosystem and ourselves? 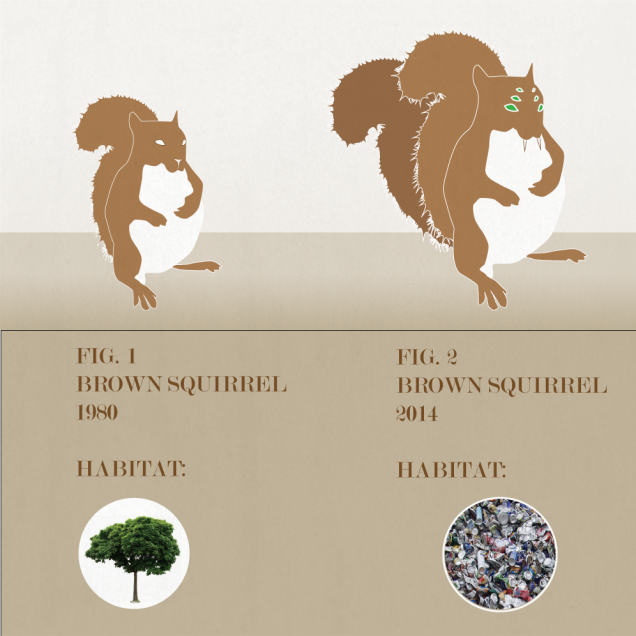 Brown Squirrels, for example, have seen their primary habitat change from forests to landfills in the last 35 years.

Every known organism on Earth follows the central dogma of genetics: DNA (deoxyribonucleic acid) is transcribed to RNA, which is then translated into protein. DNA consists of a code of paired nucleotide bases, termed the genome of the organism. Messenger RNA uses this code to determine the sequence of amino acids that make up the protein corresponding to the particular gene being expressed. Proteins then directly affect the appearance and behavior, or phenotype, of the organism. Mutations may occur when DNA is altered by factors such as UV rays, chemicals, X rays, or radioactivity. Small-scale changes include disruption of the DNA double helix shape, incorrect combination (or dimerization) of adjacent nucleotides, and insertions/deletions of bases. Large-scale mutations involve the deletions, insertions, or translocations of entire parts of the chromosomes. Since evolution works at a genetic level, one individual’s mutation has the capability of affecting the entire species.

A major player in pollution-induced mutation is the benzopyrene class of compounds. These chemicals disrupt normal maintenance and expression of genetic information when metabolized by the liver. Their metabolites, benzoyprene epoxides, alter the expression of genes by inserting themselves into DNA and preventing replication and transcription.  Polycyclic Aromatic Hydrocarbons (PAHs) are an especially destructive class of benzopyrenes, formed from the partial combustion of organic compounds, such as wood, coal, plant matter, and animal fat. Therefore, power stations, transportation, and even cigarette smoke are the greatest culprits for the rising levels of these highly mutagenic and carcinogenic compounds.1

“Mutations lead to evolution when an organism’s observable traits, or phenotype, change. For a particular mutation to lead to evolution, it must first cause a change in the organism’s observable traits, or phenotype. This most often occurs through an alteration of the DNA making up a particular gene. If the protein produced still functions normally, the mutation is considered “silent” and does not affect the organism. Not every beneficial trait within a particular organism will necessarily undergo selection. In order for the altered phenotype to be selected by evolution, it must also improve the fitness of the organism to its surroundings. Those with the new mutation must be able to survive to adulthood and reproduce more easily than the individuals without it. If the change is beneficial but does not affect the ability of the organism to have offspring, the amount of offspring with the mutation does not change, and no phenotypical change in the population will occur.

Evolution of a particular trait requires lengthy exposure to a persistent environmental stressor, such as changing climate or resource availability. Micro-evolution can occur over a relatively short time in areas where pollution is persistent or inescapable.  A species can develop resistance to a highly or consistently polluted environment through one of two paths. The first option is physiologic acclimation without a genetic basis. This physiological change cannot be inherited by the offspring, and is lost after the organism is no longer exposed to the particular stressor. The second path is through the genetic adaptation of resistance resulting from long-term exposure, and can be inherited by the offspring.2

Micro-evolution occurs most frequently in marine species. This is most likely due to limited mobility and habitat isolation that prevents the organisms from avoiding the pollution. The tomcod of the Hudson River have high mobility, but cannot escape the contamination spread throughout their habitat. The Hudson River contains historically high levels of PAHs, including polychlorinated biphenyls (PCBs) and 2, 3, 7, 8-tetrachlorodibenzo-p-dioxin (TCCD).  Effects of PAHs include DNA damage, hepatic neoplasms (epithelial carcinoma), birth defects, and increased early mortality.3 The tomcod population has evolved a genetic adaption that prevents the harmful effects of the polluting substances through a single mutation of the CYP1A gene.3 The CYP1A protein is involved in xenobiotic (foreign chemical) and drug metabolism.4 Only benzopyrene metabolites are harmful to DNA, resulting in toxic and carcinogenic effects on the organism. If the organism can slow its metabolism, then the effects of benzopyrene epoxides on the organism’s health slow as well. 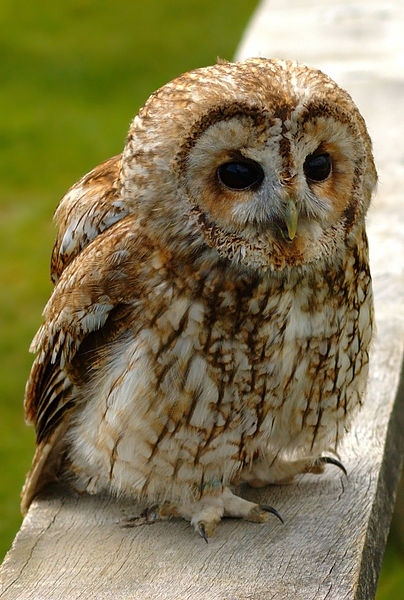 The CYP1A mutation has been positively selected because it leads to reduced inducibility of CYP1A, therefore preventing the harmful consequences described above by slowing the metabolism of chemicals such as benzopyrenes. Z. Yuan and his team proved that this newly developed resistance to PAHs in a high proportion of the tomcod Hudson River population is heritable. He found a reduced induction of CYP1A in offspring of mutated fish that were raised in a pollution-free laboratory setting.3 In a similar study, mummichog killifish also known as “mud minnows” or “mummies,” were collected from several highly polluted sites in Massachusetts, New Jersey, and Virginia. The mummichog were found to have resistance to PAHs via the reduced sensitivity of the CYP1A gene.5 These fish also have high reproductive potential and are restricted to travel within limited areas, which are favorable conditions for the selection of a particular phenotype.

Species undergoing pollution-induced evolution are not restricted to marine habitats. An interesting example of this phenomenon has occurred due to a major consequence of pollution: global warming. Tawny owls in Finland are adapting to the gradual climate change. Naturally, the dominant color of tawny owls is grey, whereas brown owls had been associated with higher mortality rates in the winter due to lack of camouflage. Yet as winters have become warmer, the snow has become less of an evolutionary pressure, which allows for the elevated presence of brown owls.6 Therefore, as the temperature increases as a result of humans’ destruction of the ozone layer, so does the ratio of brown owls to the previously dominant grey owls.

The Negative Effects of Genetic Mutations

The dramatic effects of pollution on the genetic diversity of certain species change the overall biodiversity of our ecological environment. But what about humans? As the highest level of the food chain, we are susceptible to the effects of contaminant transfer from prey to predator. If a prey species (such as the tomcod), is resistant to pollution, a higher level of contaminants will be observed at higher feeding levels, even if the predator is not subject to the same pollutant stress.3 Ethics prevents the controlled study of the pollution’s direct effects on humans. There have been no reported cases of micro-evolution as a result of a pollutant in mammals in a natural setting.

On the other hand, studies have demonstrated pollution’s effect on the genome of mammals and their offspring. Somers, of the department of Biology at McMaster University; Yauk, of Health Canada; and fellow scientists found that PAHs present in the air can also induce heritable mutations. Mice exposed to the air within an integrated steel mill had much higher expanded simple tandem repeat (ESTR) germline mutation rates than mice exposed to a rural environment. The ESTR loci are especially susceptible to genetic mutation and are therefore reliable tools for measuring the mutating ability of contamination. The study also found that the ESTR mutations were passed on to laboratory-reared offspring of the exposed mice. Interestingly, only the paternal mice had a significant mutation rate (the maternal mutation rate was only slightly elevated). How does this study apply to the human population? There are many humans living or working near steel mills. Steelworkers who are exposed to PAHs are susceptible to mutations and can pass on these mutations on to their children.7 The direct impact of repetitive DNA mutations (such as ESTR) in humans is unknown, but certainly have the potential to change coding genes (and thus possibly the phenotype) through alteration of DNA replication and repair.

Consequences for Ourselves and Our Natural World

“Humans have an advantage over other species. As previously noted, there are no human case studies of micro-evolution due to pollution. Humans have an advantage over other species; not only are we highly mobile, but our habitats are not nearly as restricting and our generations are much longer. Humans, especially recently, also have the ability to identify sources of pollution and are learning to avoid them. Humans may be able to undergo evolutionary changes similar to other mammals. According to the “fireside hypothesis,” when early human populations migrated from Africa, certain groups (those that migrated to colder climates) were exposed to fire earlier than others. Epidemiologic studies have shown that the incidence of lung cancer is inversely proportional to the reliance on fire in different geographic populations during human evolution.8 This theory is backed by multiple studies that found certain polymorphisms present in cytochrome p450 and other liver drug-metabolizing enzyme genes in humans can influence susceptibility of lung cancer.9

However, this hypothesis is not nearly the same as the cases of evolution of pollution resistance being discovered now. First of all, the time and strength of the exposure is a stark contrast to the other cases. The affected populations of the recent evolution involve persistent, severe amounts of pollution within decades. In the case of the fireside hypothesis, the exposure was progressive and much less powerful, resulting in a much longer time scale. Although this case of human evolution was certainly beneficial to the health of those who gained resistance, the current cases of micro-evolution may be considered harmful in the long-term, despite the short-term benefits.